The Battle of the Scheldt was a military operation in northern Belgium and the southwestern Netherlands that took place during the Second World War. On September 12, 1944, the First Canadian Army was given the task of clearing the Scheldt of German occupiers. The first attacks began on September 13, with little success.

Under the command of General Henry Duncan Graham (Harry) Crerar, the First Canadian Army was international in character. In addition to the 2nd Canadian Corps (which included the 2nd and 3rd Canadian Infantry Divisions and the 4th Canadian Armoured Division), the 1st British Corps, and the 1st Polish Armoured Division, at various times American, Belgian, and Dutch soldiers were also included as units. The First Canadian Army in northwestern Europe during the final phases of the war was a powerful force, the largest army that had ever been under the control of a Canadian general. The strength of this army ranged from approximately 105,000 to 175,000 Canadian soldiers to anywhere from 200,000 to over 450,000 when including the soldiers from other nations. 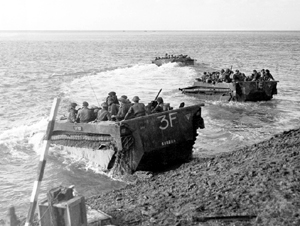 The flooded, muddy terrain and the tenacity of the well-fortified German defences made the Battle of the Scheldt especially gruelling and bloody. Indeed, the battle is considered by some historians to have been waged on the most difficult battlefield of the Second World War. At the end of the five-week offensive, the victorious First Canadian Army had taken 41,043 prisoners, but suffered 12,873 casualties (killed, wounded, or missing), 6,367 of whom were Canadians.

Fighting on the left flank of the Allied forces, the First Canadian Army pushed rapidly eastward through France toward Belgium. September began with the 2nd Canadian Infantry Division being welcomed to Dieppe. The 2nd Canadian Corps left a number of units to guard the heavily defended ports and pushed into Belgium, reaching Ostend, Bruges and Ghent by the middle of the month. By October 1, the port cities of Boulogne, Cap Gris Nez, Calais, and Dunkirk were all under Allied control. The 2nd Canadian Corps had also captured the launching sites of German rockets and put an end to their attacks on southern England.

Meanwhile, the Second British Army had pushed forward into southern Netherlands. On September 17, three British and American airborne divisions, as well as a brigade of Polish parachute troops, attempted to land behind enemy lines at Nijmegen, Eindhoven and Arnhem. Code-named Operation Market Garden, the mission’s objective was to seize a bridge over the Rhine River at Arnhem. The operation failed, with 1,400 of a total force of 35,000 killed and more than 6,000 taken prisoner. Any hope for a speedy end to the war appeared to be dashed.

Capturing a major port became a top priority as adequate supply lines for the winter now became paramount. The Second British Army had seized the port of Antwerp with its installations virtually intact. As Europe’s second-largest port, Antwerp and its 45 kilometres of docks was an ideal landing ground for supplies for the continuing war effort. In fact, the opening of the port of Antwerp was essential, since at this point the main supply lines still ran back to Normandy. 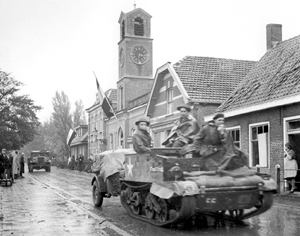 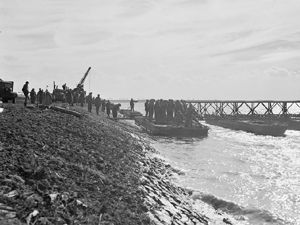 However, German occupiers still controlled the Scheldt river which connected the port of Antwerp to the North Sea. As long as the Germans held control of the sea approaches and the long winding estuary, Allied shipping to the port would be impossible. The mere occupation of Antwerp was not enough; all the lands surrounding the Scheldt would have to be liberated first.

The Battle of the Scheldt

The task of liberating the Scheldt was entrusted to the First Canadian Army, under the command of Lieutenant-General Guy Simonds (in place of General Crerar, who had returned to England because of severe illness).

The unique geography of the area made the First Canadian Army’s challenge even more daunting. North of the estuary lay South Beveland. Beyond South Beveland lay the island of Walcheren, which had been fortified into a powerful German stronghold. The south bank of the estuary was flat floodlands enclosed by dykes, known as “polder country”. It was below sea level and well-suited to defence.

The 2nd Canadian Infantry Division, advancing north to close the eastern end of South Beveland, made good progress against the enemy paratroopers who were barring the way. Casualties were heavy as Canadian troops attacked over open flooded ground, but by October 16 they had seized the town of Woensdrecht at the entrance to South Beveland.

On October 16, nearly a month after the failed airborne assault in the Netherlands, Field-Marshall Bernard Montgomery, the overall commander of the First Canadian and the Second British Armies, ordered the securing of the Scheldt be made the army’s top priority.

Meanwhile, Lieutenant-General Simonds concentrated on the area north of South Beveland. The 4th Canadian Armoured Division, which had been engaged at the Leopold Canal, moved north of the Scheldt and drove hard for the town of Bergen-op-Zoom. By October 24, the entrance to South Beveland was breached and secured and the 2nd Canadian Division began the advance into South Beveland, assisted by an amphibious landing by the 52nd British Division. By October 31, the area was secured by the Allies. 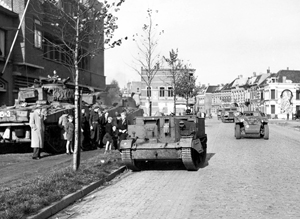 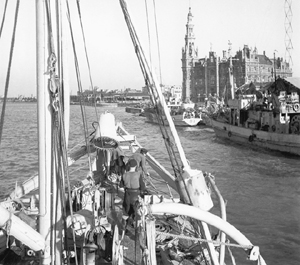 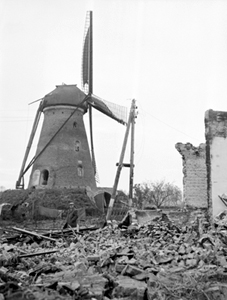 Fighting along the Scheldt’s southern shore was equally fierce. Here the 3rd Canadian Division encountered tenacious German opposition as it fought to cross the Leopold Canal and clear the Breskens pocket behind the canal. The attack began on October 6 against fierce opposition, and for three days a slender bridgehead was in constant danger of elimination. Finally, on October 9, an amphibious assault broke the enemy’s hold on the canal, and the bridgehead was deepened. Troops and tanks crossed the canal and the Germans withdrew into concrete bunkers along the coast. More fighting followed, but by November 3 the south shore of the Scheldt was secured.

This left the island of Walcheren as the last obstacle to securing the port of Antwerp for Allied use. However, the Germans had fortified their position on the island and the only land approach was the long narrow causeway from South Beveland. To make matters worse, the flats that surrounded this causeway were too saturated with sea water for movement on foot but with too little water for an assault in storm boats.

The island was attacked from three directions: across the causeway from the east, across the Scheldt from the south, and from the west by sea. To hamper German defence, the island’s dykes were breached by heavy Royal Air Force bombing, which flooded the central area and allowed the use of amphibious vehicles.

The Canadians attacked the causeway on October 31, and, after a costly struggle, established a foothold. Then, in conjunction with the waterborne attacks, the 52nd British Division continued the advance. On November 6, the island’s capital Middelburg was secured, and by November 8 all enemy opposition ended.

Meanwhile, the 4th Canadian Armoured Division had pushed eastward past Bergen-op-Zoom to St. Philipsland where it sank several German vessels in Zijpe harbour.

Thus, with the approaches to Antwerp free and the country up to the Maas River cleared, the Battle of the Scheldt was over and the crucial supply line, essential to fuel the Allied advance to liberate Europe, was secured. The channel was cleared of mines and, on November 28, the first convoy entered the port of Antwerp, led by the Canadian-built freighter Fort Cataraqui.

The campaigns in Northwest Europe could not have succeeded without the support of Allied naval and air forces. The navies kept open the sea lanes for munitions, supplies and reinforcements, while overhead the air forces cleared the skies, and engaged in dangerous bombing missions.

Those Canadians who fought in the Battle of the Scheldt achieved and sacrificed much in their efforts to help bring peace and freedom to the people of Europe. These combattants were among the more than one million men and women who served in Canada’s Armed Forces during the Second World War.

More than 42,000 Canadians gave their lives in the war. Canada and the world recognize the sacrifices and achievements of all Canadians, like those who fought in the Battle of the Scheldt, who accomplished so much and left a lasting legacy of peace. Most of the Canadians who died in the Battle of the Scheldt are buried at two Commonwealth War Cemeteries in the region. Adegem Canadian War Cemetery is in the northwest corner of Belgium, not far from the Dutch frontier. It contains the graves of 848 Canadians, most of whom lost their lives during the bitter struggle to clear the Breskens pocket on the south bank of the Scheldt.

Bergen-op-Zoom Canadian War Cemetery is located in southwest Holland. It contains the graves of 968 Canadians, most of whom fell fighting to open the sea approaches to Antwerp and make that port available to Allied shipping. 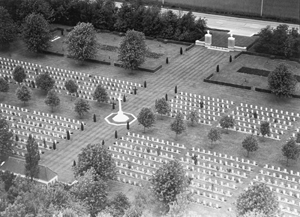 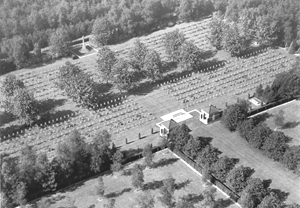 Map of the Battle of the Scheldt 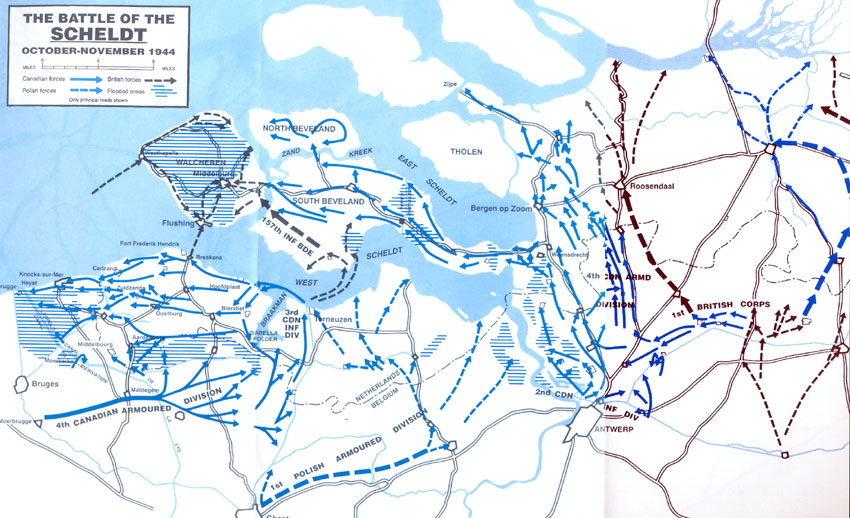