The Battle of the Atlantic was the longest campaign of World War II. In it, the German navy tried to sever the Allied sea lines of communication along which supplies necessary to fight the war were sent to Great Britain. To carry out the battle, the Germans employed a few surface raiders, but principally they used U-boats.

At the beginning of the war, the German navy possessed not the 300 U-boats deemed necessary by Kommodore (commodore) Karl Dönitz (he was promoted to rear admiral in October 1939), but 57 boats, of which only 27 were of types that could reach the Atlantic from their home bases. Although an extensive building program was immediately begun, only in the second half of 1941 did U-boat numbers begin to rise.

On the Allied side, British navy leaders were at first confident that their ASDIC (for Allied Submarine Detection Investigating Committee) location device would enable their escort vessels to defend the supply convoys against the submerged attackers so that shipping losses might be limited until the building of new merchant ships by Britain, Canada, and the United States might settle the balance. However, Dönitz planned to concentrate groups of U-boats (called “wolf packs” by the Allies) against the convoys and to jointly attack them on the surface at night. It took time, however, before the battles of the convoys really began. The Battle of the Atlantic became a running match between numbers of German U-boats and the development of their weapons against the Allied merchant ships, their sea and air escorts with improving detection equipment), and new weapons.

The Battle of the Atlantic may be subdivided into eight phases. During the first of these, from September 1939 to June 1940, a small number of U-boats, seldom more than 10 at a time, made individual cruises west of the British Isles and into the Bay of Biscay to intercept Allied merchant ships. Generally, these operated independently because the convoy system, which the British Admiralty had planned before the war, was slow to take shape. Thus the U-boats found targets, attacking at first according to prize rules by identifying the ship and providing for the safety of its crew. However, when Britain armed its merchant ships, increasingly the German submarines struck without warning. Dönitz’s plan to counter the convoy with group or “pack” operations of U-boats— also developed and tested before the war—was put on trial in October and November 1939 and in February 1940. The results confirmed the possibility of vectoring a group of U- boats to a convoy by radio signals from whichever U-boat first sighted the convoy. However, at this time, the insufficient numbers of U-boats available and frequent torpedo failures prevented real successes.

The German conquest of Norway and western France provided the U-boats with new bases much closer to the main operational area off the Western Approaches and brought about a second phase from July 1940 to May 1941. In this phase, the U-boats, operated in groups or wolf packs, were directed by radio signals from the shore against the convoys, in which was now concentrated most of the maritime traffic to and from Great Britain. Even if the number of U-boats in the operational area still did not rise to more than 10 at a time, a peak of efficacy was attained in terms of the relationship between tonnage sunk and U-boat days at sea. This was made possible partly by the weakness of the convoy escort groups because the Royal Navy held back destroyers to guard against an expected German invasion of Britain. In addition, British merchant shipping losses were greatly augmented during this phase by the operations of German surface warships in the north and central Atlantic; by armed merchant raiders in the Atlantic, Pacific, and Indian Oceans; by the attacks of German long-range bombers against the Western Approaches; and by heavy German air attacks against British harbours. The Germans were also aided by Italian submarines based at Bordeaux and sent into the Atlantic, the numbers of which in early 1941 actually surpassed the number of German U-boats.

In late 1940 and spring 1941, when the danger of an invasion of the British Isles had receded, London released destroyers for antisubmarine operations and redeployed Coastal Command aircraft to support the convoys off the Western Approaches. Thus, in the third phase of the Battle of the Atlantic, from May to December 1941, the U-boats were forced to operate at greater distances from shore. Long lines of U-boats patrolled across the convoy routes in an effort to intercept supply ships. This, in turn, forced the British in June to begin escorting their convoys along the whole route from Newfoundland to the Western Approaches and—when the U-boats began to cruise off West Africa—the route from Freetown to Gibraltar and the United Kingdom as well. 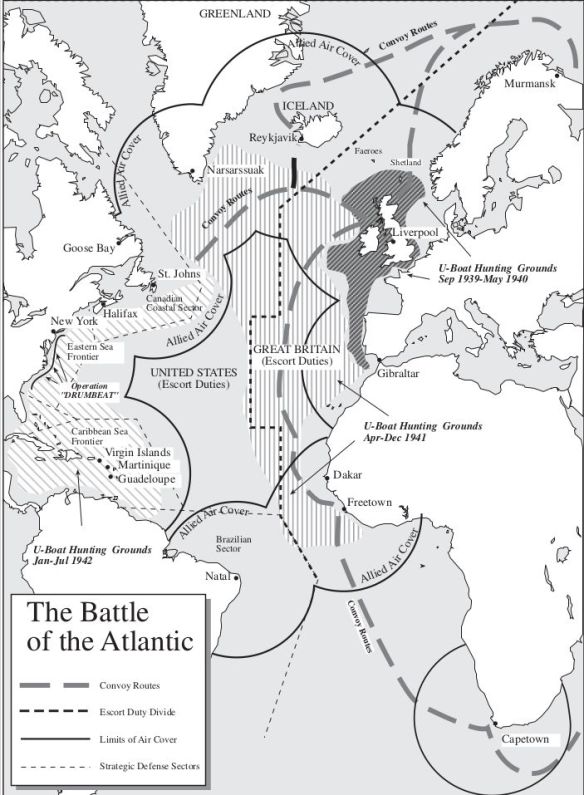 In March 1941, the Allies captured cipher materials from a German patrol vessel. Then, on 7 May 1941, the Royal Navy succeeded in capturing the German Arctic meteorological vessel München and seizing her Enigma machine intact. Settings secured from this encoding machine enabled the Royal Navy to read June U-boat radio traffic practically currently. On 9 May during a convoy battle, the British destroyer Bulldog captured the German submarine U-110 and secured the settings for the high-grade officer-only German naval signals. The capture on 28 June of a second German weather ship, Lauenburg, enabled British decryption operations at Bletchley Park (BP) to read July German home-waters radio traffic currently. This led to interception of German supply ships in the Atlantic and cessation of German surface ship operations in the Atlantic. Beginning in August 1941, BP operatives could decrypt signals between the commander of U-boats and his U-boats at sea. The Allies were thus able to reroute convoys and save perhaps 1.5 million gross tons of shipping. During this third phase, the U. S. Atlantic Fleet was first involved in the battle.

The entry of the United States into the war after the Japanese attack on Pearl Harbor ushered in the fourth phase of the battle, presenting the U-boats with a second golden opportunity from January to July 1942. Attacking unescorted individual ships off the U. S. East Coast, in the Gulf of Mexico, and in the Caribbean, German U-boats sank greater tonnages than during any other period of the war.

But sightings and sinkings off the U. S. East Coast dropped off sharply after the introduction of the interlocking convoy system there, and Dönitz found operations by individual U- boats in such distant waters uneconomical. Thus, in July 1942, he switched the U-boats back to the North Atlantic convoy route. This began the fifth phase, which lasted until May 1943. Now came the decisive period of the conflict between the U-boat groups and the convoys with their sea and air escorts. Increasingly, the battle was influenced by technical innovations. Most important in this regard were efforts on both sides in the field of signals intelligence.

On 1 February 1942, the Germans had introduced their new M-4 cipher machine, leading to a blackout in decryption that lasted until the end of December 1942. This accomplishment was of limited influence during the fourth phase, because the German U-boats operated individually according to their given orders, and there was no great signal traffic in the operational areas. And when the convoy battles began again, the Germans could at first decrypt Allied convoy signals.

But when Bletchley Park was able to decrypt German signals anew, rerouting of the convoys again became possible, although this was at first limited by rising numbers of German U-boats in patrol lines. In March 1943, the U-boats achieved their greatest successes against the convoys, and the entire convoy system—the backbone of the Allied strategy against “Fortress Europe”—seemed in jeopardy. Now Allied decryption allowed the dispatch of additional surface and air escorts to support threatened convoys. This development, in connection with the introduction of new weapons and high-frequency direction finding, led to the collapse of the U-boat offensive against the convoys only eight weeks later, in May 1943.

This collapse came as a surprise to Dönitz. Allied success in this regard could be attributed mainly to the provision of centimetric radar equipment for the sea and air escorts and the closing of the air gap in the North Atlantic. In a sixth (intermediate) phase from June to August 1943, the U-boats were sent to distant areas where the antisubmarine forces were weak, while the Allied air forces tried to block the U-boat transit routes across the Bay of Biscay.

The change to a new Allied convoy cipher in June, which the German decryption service could not break, made it more difficult for the U-boats to locate the convoys in what was the seventh phase from September 1943 to June 1944. During this time, the German U-boat command tried to deploy new weapons (acoustic torpedoes and increased antiaircraft armament) and new equipment (radar warning sets) to force again a decision with the convoys, first in the North Atlantic and then on the Gibraltar routes. After short-lived success, these operations failed and tapered off as the Germans tried to pin down Allied forces until new, revolutionary U-boat types became available for operational deployment.

The final, eighth phase, from June 1944 to May 1945, began with the Allied invasion of Normandy. The U-boats, now equipped with “snorkel” breathing masts, endeavoured to carry out attacks against individual supply ships in the shallow waters of the English Channel and in British and Canadian coastal waters. The U-boats’ mission was to pin down Allied supply traffic and antisubmarine forces to prevent the deployment of warships in offensive roles against German-occupied areas. But construction of the new U-boats (of which the Allies received information by decrypting reports sent to Tokyo by the Japanese embassy in Berlin) was delayed by the Allied bombing offensive, and the German land defences collapsed before sufficient numbers of these boats were ready.

The Battle of the Atlantic lasted without interruption for 69 months, during which time German U-boats sank 2,850 Allied and neutral merchant ships, 2,520 of them in the Atlantic and Indian Oceans. The U-boats also sank many warships, from aircraft carriers to destroyers, frigates, corvettes and other antisubmarine vessels. The Germans lost, in turn,

one large battleship, one pocket battleship, some armed merchant raiders, and 650 U-boats, 522 of them in the Atlantic and Indian Oceans.

The Allied victory in the Battle of the Atlantic resulted from the vastly superior resources on the Allied side in shipbuilding and aircraft production (the ability to replace lost ships and aircraft) and from superior antisubmarine detection equipment and weapons. Allied signals intelligence was critical to the victory.