On April 14, 1941, federal agriculture minister James Gardiner delivered an urgent address to the nation’s farmers. His words were broadcast coast-to-coast by CBC Radio. Canada had been at war for nearly 20 months and Gardiner began by summarizing where things stood. The Allies were in the midst of a titanic and deadly struggle with Nazi Germany for control of the North Atlantic. They had to win, as British Prime Minister Winston Churchill had earlier warned, or totalitarianism would triumph over democracy, slavery over freedom, evil over good. “I do not come offering,” Gardiner declared, “I come asking. Asking that every Canadian dollar and every Canadian acre be made to yield its utmost toward the accomplishment of Churchill’s double purpose—the winning of the Battle of the Atlantic in order that Britain and her allied nations may be armed, munitioned and fed while the forces of democracy are making ready for the greatest battle of all time….”

Gardiner came asking that night for a fundamental change in the immense agricultural output of the vast and bounteous Dominion of Canada. The country had achieved international renown as a top agricultural producer. Wheat was the very foundation and cornerstone of the economies of three provinces—Manitoba, Saskatchewan and Alberta. Indeed, it had been Canada’s most important export to Britain during the First World War. Gardiner himself had told the House of Commons as recently as November 1940 that: “Wheat is the outstanding Canadian produce…the one material resource that is of greater importance than any other, in order that this war might be prosecuted to a successful conclusion.”

Now—just as the country’s farmers were beginning to work their fields and prepare for spring seeding—Gardiner had a stunning admission to make. Wheat was still important, but Canada had to begin producing a lot less of it and a lot more of other agricultural commodities. “In the vernacular of the hockey fan…WE WANT HOGS,” Gardiner bellowed. “We have already increased our hog production by 40 percent just because we thought Britain needed them…. Now that she is asking us for more, we can increase them by another 20 percent. And you farmers of all Canada will do it.

“WE WANT CHEESE,” the minister bellowed again. “We have already increased our cheese production by 40 percent. We should increase it by another 40 percent…Ontario, Quebec and the Maritimes can do it and you will do it.

Gardiner’s speech signalled the start of one of the most profound transformations in the history of Canadian agriculture. Encouraged by government incentive programs and swayed by propaganda that appealed to their patriotic instincts, the country’s farmers changed direction as requested and produced the required foodstuffs in such vast quantities that their contribution to the Allied victory was universally recognized. Stacey Barker, an assistant curator at the Canadian Museum of Civilization and an expert on wartime agriculture, notes that in 1938 Canada produced 3.4 million hogs for slaughter. By 1944 the number had increased to 7.4 million. That year, the country shipped 700 million pounds of bacon to Britain and met 85 percent of British demand. Over the course of the war, Canada exported nearly three billion pounds.

Increases of such startling magnitude led to the following observation in the Sept. 2, 1944, edition of Saturday Night magazine. “The Canadian farmer is a very important fellow today,” wrote H.G. Cochrane. “He is no longer the Forgotten Man he was in the Thirties. Today, victory depends on his production just as much as it does on the sustained effort of the munitions worker or on the strategy and fighting spirit of the men in uniform. Canadian agriculture has done a splendid job in the war effort.”

At the outset, though, Canada had a problem. The country was awash in wheat. After the dust bowl of the early 1930s, good weather returned and western farmers produced bumper crops in 1938 and again in 1939. Then in 1940, they anticipated a repeat of the First World War when demand and prices exploded. They sowed more acres to wheat than ever before and harvested an astonishing 500 million bushels. Suddenly, farmyard granaries and country elevators across the Prairies were stuffed with more of the grain than could possibly be consumed domestically, or by the country’s closest ally, Great Britain. “I do not need to prove to you,” Gardiner said in his April 1941 address to the country’s farmers, “that wheat is one of our greatest problems at present.”

In that speech, the minister announced the Wheat Acreage Reduction Program, under which the government would pay farmers $4 per acre that was converted from wheat to summer fallow and $2 per acre switched to oats or barley. As well, that spring the federal Department of Agriculture distributed to every farm household in Manitoba, Saskatchewan and Alberta, pamphlets emblazoned with the heading, “Less Wheat in 1941 Will Help Win the War.” The fine print called for “more hogs, more butter, more beef, more feed.” 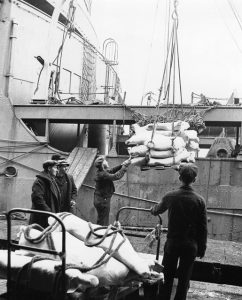 At first, these initiatives were only partly successful. Western farmers sowed fewer acres in wheat in 1941 than at any time since 1925, according to the historians I. MacPherson and J.H. Thompson. Wheat acreage fell again the following year. Nevertheless, ideal growing conditions yielded another 500-million bushel wheat crop in 1942 and by mid-1943 the country was stuck with an unprecedented surplus of 600 million bushels. As well, farmers were more inclined to leave their land fallow and collect the $4 per acre rather than planting oats or barley for $2 an acre plus whatever those crops would fetch at market. As a result, they weren’t producing enough feed grains.

The government responded in 1943 by doubling the per acre incentive for converting to feed grains, established guaranteed minimum prices for oats and barley and introduced transportation subsidies to reduce the cost of shipping to Ontario and Quebec, where most of the country’s hog farms were located. These measures did produce the desired results. Prairie farmers planted 16 million acres of wheat in 1943, down from 27 million in 1940, while oats, barley and rye acreage doubled to 20 million acres. Another historian, V.C. Fowke, has observed that wartime diversification led to “the unprecedented condition where the prairie agricultural economy secured less than one-third of its cash income from wheat.”

While farmers everywhere were switching gears and changing directions to meet the needs of a war economy, they were also raising production by leaps and bounds and doing it with fewer workers. “Total farm production, as measured in dollars, has increased almost 50 percent over pre-war years,” Cochrane wrote in Saturday Night magazine. “It is a remarkable accomplishment when we consider that just over a million farm workers are today maintaining this record volume of production compared with almost a million and a half in 1939….” 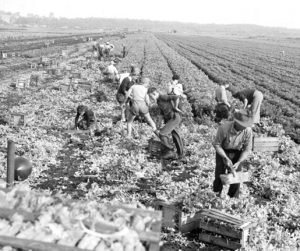 He went on to note that the burdens of war were taking a toll on farmers. “They have been working longer hours,” Cochrane wrote. “They are tired. Their plant and equipment are suffering from neglect and deferred maintenance, their fences need mending.”

Those observations are borne out by the recollections of a Manitoba farmer quoted in Barry Broadfoot’s Six War Years: 1939-1945; Memories of Canadians at Home and Abroad, an oral history published in 1974. This fellow—Broadfoot doesn’t identify him—was only 19 when his older brother went off to war in 1941. “I just stayed on the home place and worked,” he told the author. “Worked like hell, my own half-section, my brother’s half and my father’s section, and two sections without help and machinery falling apart….

“I worked from five in the morning, all morning dead flat as all get-out until noon and I’d lie down after dinner and listen to the grain prices from the Winnipeg Stock Exchange and then out again doing some damn-fool thing like harvesting or seeding or cultivating or just mending fence until suppertime. Then suppertime and read the mail that came in from town, and maybe look over the Prairie Farmer and go to bed about eight at night. I think in those years I only took off Christmas and Dominion Day, July 1.”

The brother returned from the war set to reclaim his half-section, but the farmer’s wife set her brother-in-law straight. As the farmer recalled to Broadfoot: “She told him: ‘Look at your brother,’ and she says that I looked thirty-five. I remember going across to the mirror over the sink by the pump and, by God, I did. I looked like an old man and I was only twenty-three.”

In the spring of 1942, the federal government began imposing controls on farm workers to ensure there was an adequate supply of labour. German prisoners of war were put to work on farms. Canadians of Japanese descent, who were being held in internment camps, were assigned to agricultural jobs. Students on the Prairies were released from school to help with seeding and planting. As well, governments maintained pools of labourers who could be shifted from one part of the country to another as the need arose.

As historians MacPherson and Thompson note: “There were men and women who, in any given year, might work in the small fruit districts of British Columbia or Ontario, the tobacco fields near Tillsonburg, Ont., the potato districts of New Brunswick, and the grain fields or sugar beet industries of the Prairies.”

Farmers also invested heavily in new machinery in order to improve the efficiency of their operations and to reduce their workloads. From 1935 to 1938, Canadian farmers purchased 5,619 tractors per year, on average, and 589 combines. In 1939, tractor sales jumped to 8,755 and combines to 2,441. Tractor purchases peaked at 12,782 in 1940 while the best year for combines was 1945 when farmers bought 6,609. But mechanization was far less widespread than it might have been under peacetime conditions. “The need for machines of war meant that in 1941 production of farm machinery was officially reduced,” MacPherson and Thompson write, “and in 1942 quotas were imposed on imports of tractors and combines from the United States. As of October 1942, machinery was rationed and made available to farmers only by a permit system.”

The war had its most profound effect on the Prairie provinces where farmers were forced to reduce their reliance on wheat and to diversify the mix of crops they grew. Fowke observes that in the Maritimes, Ontario and Quebec the volume of agricultural output and the value of various products grew substantially, but the ranking of products and commodities changed very little. As well, the various farm sectors did not benefit uniformly from the war and some—like apple growers in Nova Scotia’s Annapolis Valley, Ontario’s Niagara Peninsula and B.C.’s Okanagan Valley—were hurt.

Barker points out that, prior to the war, growers in all three regions exported significant portions of their crops to Britain each year. But due to the dangers involved in crossing the North Atlantic and the limited space available on ships, the British government imposed tight restrictions on imports of apples. Ottawa had to step in and provide price supports for farmers who had suddenly lost a big chunk of their market. On the other hand, egg producers in central Canada and potato growers in New Brunswick and Prince Edward Island benefitted. Advances in dehydration technology allowed them to export dried egg and potatoes to help feed soldiers and civilians.

In short, the war touched farmers in every nook and cranny of the country, some more so than others, but each made their contribution according to the call of the times. And an old friend and ally was deeply grateful, as the Right Honourable Malcolm MacDonald, British High Commissioner to Canada told the Financial Post newspaper in May 1944: “The people of Britain needed sufficient food to keep body and soul together until the forces of freedom all around the world should come to their rescue to help them beat back the Nazi conquerors. That essential food was provided, in large measure, by the farmers of Canada.”